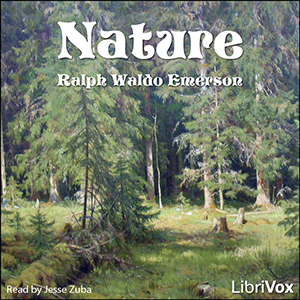 LibriVox recording of Nature (version 2) by Ralph Waldo Emerson.
Read in English by Jesse Zuba
First published anonymously in 1836, Nature marks the beginning both of Emerson’s literary career and the Transcendentalist movement. Asking why his generation “should not also enjoy an original relation to the universe,” Emerson argues that “Man is a god in ruins” who might yet be redeemed by the renewal of harmony with nature. Encompassing themes that would preoccupy him for years to come, including the repressive force of social routine, the divinity of nature, and the creative potential of the individual, Nature reflected recent developments in European philosophy and literature even as it pushed American artists to break new ground. The book’s initial reception was mixed, but it influenced members of Emerson’s circle, including such luminaries as Henry David Thoreau and Margaret Fuller, and it would go on to inspire the work of writers ranging from Walt Whitman and Friedrich Nietzsche to Robert Frost and Ralph Ellison. - Summary by Jesse Zuba
For further information, including links to online text, reader information, RSS feeds, CD cover or other formats (if available), please go to the LibriVox catalog page for this recording.